You are here: Home / Agriculture / Beef Month comes amid challenges for industry 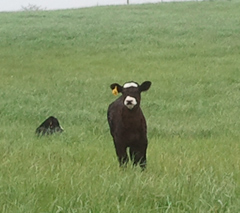 May is National Beef month, a time to promote the industry in the midst of some of its greatest challenges. A controversy over lean, finely textured beef has led by layoffs at beef processing plants in Iowa and elsewhere.

“It certainly is unfortunate what has happened, you know, to the lean finely textured beef and you know it’s a product that has been used a long time. It’s a safe product,” says Joe Sellers, a beef specialist for Iowa State University Extension. “But honestly, the consumer is kind of the driver on some of these things even if it is misinformation…consumers make the final choices of what people buy.”

There’s also growing consumer demand for grass-fed rather than corn-fed beef, just as pastures and hay fields are plowed under and used to grow high-priced corn and soybeans.

“We’re seeing some changes, but on the other hand we still maintain about as big a cow herd as we’ve ever had so, at least up until, you know, the last few years,” Sellers says, “so I think, you know, we’re seeing some areas where we people are really trying to get into cattle production but on the other hand then we’re losing pasture acres, so it makes it even more important to manage the forage acres we have even better.”

Sellers is hosting a class on May 24th for Adair County cattle producers to help them improve pasture management.

According to the Iowa Beef Industry Council there were more cattle than people in Iowa on January 1. Producers had 3.9 million head of cattle in Iowa pastures or in feed lots at the beginning of the year. Iowa ranks sixth in beef production and more than 30,000 Iowa farm operations were raising cattle in 2007, the most recent year that stat is available.