You are here: Home / Fires/Accidents/Disasters / Bettendorf police say texting involved in I-74 accident 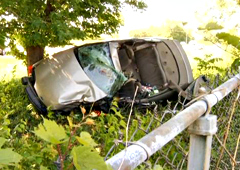 Police say this wreck was a result of texting and driving.

The driver hurt earlier this week in an eastern Iowa car wreck was texting. Bettendorf police say 24-year-old Jennifer DeClerck of Moline, Illinois, admitted to texting on her cell phone just before the crash on Interstate 74.

At last report, DeClerck was in fair condition at a Davenport hospital. She’d been airlifted there with serious injuries. The crash was spectacular. DeClerck lost control of her vehicle. It then went into a ditch, hit the side of an on-ramp, went airborne, hit a tree and ended in a ditch on the other side of the on-ramp.

Both northbound lanes of the interstate were closed to traffic for about 25 minutes while firefighters extricated her from the car.