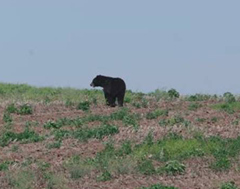 The Fayette County Sheriff's Department spotted this bear in the county.

There was another black bear sighting in northeast Iowa this morning. The Chickasaw County Sheriff’s office took a report that a black bear was seen near a golf course in Fredricksburg at 7:30 a.m.

It was later spotted in timber near the city’s wastewater treatment plant. The Iowa Department of Natural Resources reports it’s likely the same bear that was spotted 20 miles away, last Friday morning, in West Union.

The bear was just a half-mile north of North Fayette High School. Students were kept inside the school while Fayette County Sheriff Marty Fisher used an ATV to turn the bear around and back into a wooded area.

D.N.R. officials say it’s not uncommon for bears to wander into Iowa from Wisconsin and Minnesota at this time of year.