You are here: Home / Education / Governor’s symposium to focus on teachers as school leaders (audio) 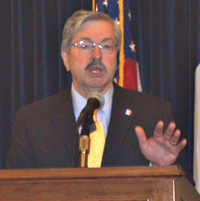 Iowa’s governor will host a one-day education “symposium” this summer, part of his push to get legislators to embrace changes in the way teachers are paid.

Governor Terry Branstad says the event will focus on ways to give teachers leadership roles, outside their classrooms.

“Principals alone cannot provide all the leadership that’s needed inside our schools to continually improve education and raise achievement for our students,” Branstad says.

Last fall Branstad proposed then tabled a three-tiered system for the teaching profession. It started with apprentice teachers who would move on to become career teachers, then a few would become master teachers. The ultimate goal is to cut the tie between pay and tenure and, instead, link pay to performance. Iowa Department of Education director Jason Glass says raising base pay for educators and increasing pay for teachers who volunteer to take on additional responsibilities are part of that conversation.

However, Branstad says not all education reform ideas are about money.

Branstad has referred to the education reform bill he received from the 2012 Iowa legislature as merely a “first step.” This summer’s symposium is part of Branstad’s plan to build public support for those additional steps.

“This is going to be a full-court press,” Branstad says.

The symposium focused on principal and teacher collaboration will be held August 3 at Drake University.

Branstad and Glass made their comments this morning during the governor’s weekly news conference.