You are here: Home / Sports / Waterloo Black Hawks look for underdog win on the road 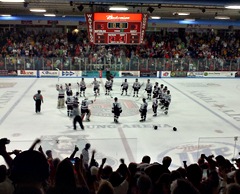 The United States Hockey League’s Clark Cup Finals will be decided Wednesday night when the Waterloo Black Hawks travel to Green Bay for the fifth and deciding game of what has been an intense championship series for both players and fans.

The Black Hawks evened the best-of-five set and forced the winner-takes-all game when they beat the Gamblers 5-3 in Game Four Saturday night in Waterloo.

Black Hawks Coach P.K. O’Handley says he expects another strenuous game Wednesday evening. “It should be a great environment much like here,” O’Handley says. He expects the crowed to be into and expects a good game.

Waterloo is facing a team that hasn’t lost back-to-back games all season. However, the Black Hawks won 2 of their last 3 games played against the Gamblers in Green Bay.

Waterloo entered the Clark Cup Finals having won 19 of 23 games, but still wasn’t expected to give the USHL’s regular-season champion much of a challenge when the series began. A road victory, though, in Game One helped put the Black Hawks in position to win the title and O’Handley says all the pressure is on the Gamblers to stop Waterloo.

“I still think the pressure is on them, the fact that we are in game 5 says a lot about our hockey team,” O’Handley says. He says his team just wanted an opportunity to win, and while Green Bay has a chance to win, they certainly have more pressure as the favorite.

If the Black Hawks beat Green Bay at the Resch Center, they’ll become the first team since the Des Moines Buccaneers in 2006 to win Game Five of the Clark Cup Finals on the road.