President Obama made a dual-purpose trip to Iowa today, giving a policy speech in Newton late in the afternoon before an evening campaign rally with supporters in Des Moines. Obama used the rally to respond directly to Republican rival Mitt Romney. 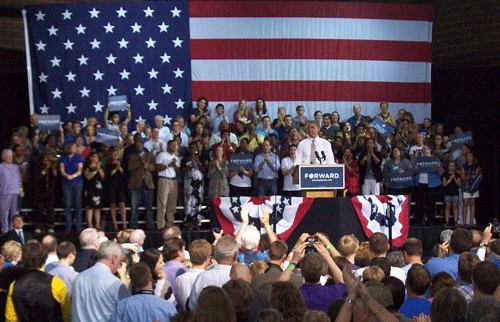 “I know Governor Romney came to Des Moines last week, warned about a ‘prairie fire of debt’ — that’s what he said, ‘prairie fire!’ — you know, he left out some facts. You know, his speech was more like a cowpie of distortion,” Obama said and the crowd laughed.

“What happens is the Republicans run up the tab and then we’re sitting there and they’ve left the restaurant and then they point (and say), ‘Why’d you order all those steaks and martinis?'” Obama said. “What he did not also tell you was that after inherited a trillion dollar deficit, I signed $2 trillion of spending cuts into law, so now I want to finish the job.”

Obama said he would streamline government and seek to reform the tax code, making it simpler and easier. Obama ridiculed Romney’s tax plans.

“Five trillion in new tax cuts — that is like trying to put out a prairie fire with some gasoline,” Obama said, to laughter and applause.

Obama repeatedly rapped Romney throughout the evening speech, suggesting Romney’s role at a venture capital business was not kind of experience one needs for the presidency.

“Bigger profits haven’t led to better jobs, and you can’t solve that problem if you can’t even see that it’s a problem,” Obama said, to loud cheers.

A crowd of about 2500 gathered inside a building on the fairgrounds to see Obama, with a few hundred gathered outside who couldn’t get in. Campaign organizers spoke before the president’s arrival about the importance role Iowa will play in the fall election. Obama picked up that theme, suggesting Iowans were the “first ones in this country” who believed in the idea of a President Obama.

“It is still about change. It is still about ordinary folks who believe that in the face of great odds we can make a difference in the life of this country. Don’t let ’em tell ya different,” Obama said, to cheers. “…I still believe in you and I want you to keep believing in me.”