You are here: Home / News / President pushes for extension of wind tax credit in visit to Newton 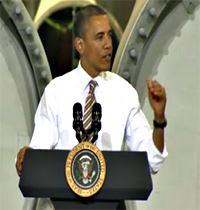 Air Force One landed in Des Moines in the middle of the afternoon and President Obama made his way to the TPI Composites factory in Newton.

“We couldn’t take the helicopter in because the winds were too strong, so you are defintely in the right business,” Obama said. “Obviously there’s some wind power here in Iowa that we want to tap.”

The factory makes the huge blades for wind turbines, but company’s CEO says uncertainty about wind energy-related tax credits for manufacturers and utilities has dampened new orders. Obama suggested the industry is in “jeopardy” because congress hasn’t acted.

“I’m calling on congress to extend tax credits that are set to expire at the end of the year for clean energy companies like TPI,” Obama said, to cheers and applause.

Many of the workers who applauded Obama lost work when Maytag shut down in Newton, but found work again in the wind industry.

“I need everybody here in Newton…everybody here in Iowa, pick up the phone, send an email, send a tweet, tell congress: ‘Let’s do the right thing,'” Obama urged at the close of his speech on the factory floor. “Tell congress the story of Newton. Tell folks why it’s so important to this community. We’ve come too far to turn back now.”

Obama then made his way back to Des Moines for a campaign rally on the state fairgrounds.