You are here: Home / News / Governor’s delegation meets with several companies in China 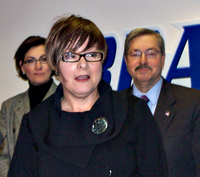 Debbie Durham with the Governor and Lt. Governor. (file photo)

Governor Terry Branstad is describing his latest trip to China as “very productive.” A delegation of around 20 Iowans are in the middle of a week-long visit to China.

Branstad, who spoke with Radio Iowa by phone this morning from Beijing, said he’s met with several companies that are interested in making direct investments in Iowa. “Especially in the area of biosciences and food processing,” Branstad said.

“We’ve also met with a company that’s involved in wind energy and they’ve put a couple of wind turbines in Nevada, Iowa and they’re looking at possibly making additional investments in the state.”

The governor said interest among Chinese business leaders in expanding in Iowa has grown “dramatically” since Chinese Vice President Xi Jinping’s visit to Iowa back in February. This is the third trip to China for Debi Durham, director of the Iowa Economic Development Authority.

“I’ve been very encouraged by the reception we’ve had this time,” Durham said. “We’re meeting with chief decision makers of companies and really have seen a much greater focus this time on direct investment.” Branstad expects officials from several companies based in China to visit Iowa soon, including one such visit planned for next week.

The governor declined to identify the company or provide details about what they might do in Iowa. “This is a company that has some real interest in the Midwest. They’ve already done some business in the United States and we’re exploring some other opportunities,” Branstad said. Earlier this week, the governor attended a ribbon-cutting for a new Vermeer manufacturing plant in Beijing.

Vermeer is based in Pella. Branstad will meet with Vice-President Xi and China’s minister of agriculture this weekend.