You are here: Home / Education / Attention to student retention a priority at NICC 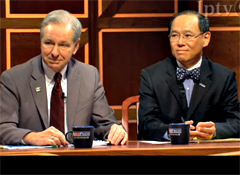 About a third of the students who enroll at Northeast Iowa Community College graduate within three years — a graduation rate 10 percentage points better than the national average.

Northeast Iowa Community College president Liang Chee Wee says every student who enrolls at the school gets an initial call for the admissions department and then two meetings with an advisor.

“We look at their placement. We look at their previous preparation,” Wee says. “We have people who come through our doors having been out of school for 30 years and so for us, it’s not so much about getting them in the classes. It’s creating a game plan that says, ‘How can we create a game plan that helps that person be successful?’ before that person even steps foot in the classroom.”

Last fall a non-profit group called the Aspen Institute ranked Northeast Iowa Community College as one of the top 10 community colleges in the nation. Tutoring is available 24 hours a day to students and Wee says the college aims to help students who find it difficult to afford tuition.

“For us, we just want to make sure how we can provide more funding to the students through scholarships and, at the same time, advocate to the federal government for Pell Grants, for example. That’s huge,” Wee says. “During the summer, we find that the Pell Grant is not really available to our students, so some of the students are not in school. We find that they are successful when they continue to be in classes.”

Wee often tells administrators, instructors and others on his campus that “student retention is everyone’s business” and he encourages staff to learn about the student’s life away from school.

Wee made his comments during a weekend appearance on Iowa Public Television. Wee, a native of Singapore, is an economist who was on the Luther College faculty for 15 years before accepting a job as provost at Northeast Iowa Community College in 2007. He served as interim president of the school before being named its president last October. Northeast Iowa Community College has two main campuses, in Calmar and Peosta. Classes are also offered at attendance centers in Dubuque, Cresco, Manchester, Oelwein, and Waukon.