You are here: Home / News / Dueling news conferences in Iowa from presidential camps 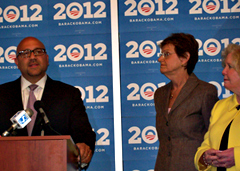 On the day before Iowa voters go to the polls to decide a series of local Primary elections, the two presidential campaigns tried to divert attention to their General Election contest.

During a news conference this morning at his printing company in Urbandale, Colorfx CEO Jon Troen accused the Obama Administration of attacking free enterprise with new government regulations.

“Our company isn’t successful because of the president’s policies,” Troen said. “Our company’s successful in spite of them.” Troen’s company, by the way, also announced its acquisition of rival Acme Printing today.

Iowa Lieutenant Governor Kim Reynolds suggested Iowa’s businesses “are happy” with the way she and Republican Governor Terry Branstad are running state government, but Obama Administration policies are too burdensome.

“If we would remove that chain that the policies have placed on business, then who knows where we could be,” Reynolds said. 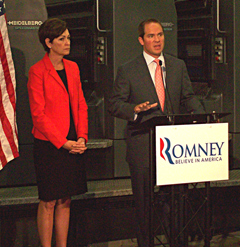 Joining Pederson at the news conference were two state legislators from Massachusetts, where Romney was governor from 2003 through 2007.

“What we saw under Mitt Romney back then and what we hear now (are) two different things,” said Massachusetts State Representative Jeffrey Sanchez.

Massachusetts State Representative Cory Atkins suggested Romney was “sneaky” in sticking to a “no new taxes” pledge, as fees rose dramatically due his tenure as governor.

“All of his promises just turned out to be empty promises at best,” she said, “and the absolute opposite happened at worst.”

The point/counter-point pitches continue from both campaigns in advertising that’s been airing on Iowa radio and TV stations for weeks.

A recent NBC poll found Romney and Obama tied in Iowa at 44 percent, so expect the barrage of ads and campaign action to continue in Iowa until Election Day, which is 155 days away.