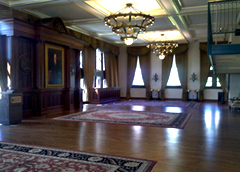 The Norman Borlaug World Food Prize Hall of Laureates opens to the public this week, for the first time since a $29-million restoration of the century-old Des Moines building was completed last October.

World Food Prize Foundation president Kenneth Quinn says one reason for delaying a full-time opening was the building needed to be LEED certified.

“This is basically to test all of the energy systems,” Quinn says. “So you have to run them all, the heating and the air conditioning, so they can be assessed about their energy conservation basis, so the building has to be shut down while that goes on.”

The building is named after the late Doctor Norman Borlaug, the Cresco, Iowa, native credited with making world-changing breakthroughs in agriculture. Quinn says the former Des Moines library building now has a new purpose as an educational and cultural center.

Tomorrow is the first day the Hall will be open for tours. It will be open every Tuesday and Saturday to the public.