You are here: Home / Human Interest / Venus to transit in front of the sun today 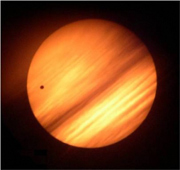 An unusual celestial event will be visible late this afternoon and early this evening in the skies over Iowa, unless clouds cover our view.

Richard Miles, spokesman for the Science Center of Iowa, says this astronomical occurrence is what’s known as a “transit” of the planet Venus.

“We’re going to have Venus pass between the Earth and the Sun such that from here on Earth, we’ll actually see Venus appear to move across the face of the Sun,” Miles says. “You can safely observe this through a telescope with a solar filter or with solar eclipse glasses.”

Venus will be seen as a small black disk moving across the face of the Sun. If you missed the last transit of Venus a few years ago, this will be the final chance to see such a sky show in your lifetime.

“This is a rare event,” Miles says. “The last time it happened was eight years ago but the next time it will happen is 105 years. It happens on a pattern that is usually a very long time, around 105 years, then an eight-year gap before the next one, then another 105 years and so on.”

This phenomenon will not occur again until December 11th of 2117. Miles hopes this event will attract young Iowans to look toward the heavens with a new curiosity and consider a career in science or astronomy.

He says, “Not only is it just fascinating to see a planet moving in the daytime across the face of the sun but also when they look at the sun, they’ll be able to see things like sunspots and solar prominences erupting from the sun, so, some pretty neat stuff.”

The Des Moines-based Science Center of Iowa will have telescopes with solar filters set up at 5:00 P.M. near the “Shattering Silence” sculpture at the State Capitol Complex. The transit will last until about 8:45 P.M.