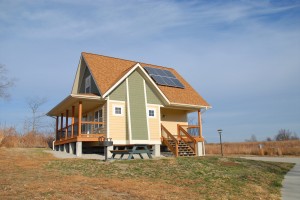 A large donation to the Iowa Department of Natural Resources has helped launch several renewable energy projects at state parks. The posthumous donation came from Chris Desjardins, a Pella Corporation engineer who died suddenly in 2009 at the age of 47.

He grew up in Omaha and never lived in Iowa, but worked for the Iowa-based window manufacturer for 23 years. Tammi Krausman, with the D.N.R., says visitors to the Honey Creek State Park Resort near Moravia will notice several “green” initiatives financed in part by Desjardins’ six-figure gift.

The resort uses a wind turbine to provide power to an activities building and the main lodge. “We also have solar thermal which heats almost all of the hot water to the lodge as well as some of the indoor water park. So, when you go and take a shower at Honey Creek, the hot water is provided by the sun,” Krausman says.

The resort also has five cottages powered by solar electricity panels. And Honey Creek is one of three state parks with solar-powered light poles. The others are the E.B. Lyons Nature Center in Dubuque and Lewis and Clark State Park in Onawa.

Krausman says Desjardins was passionate about renewable energy and environmental issues. “Chris wasn’t the type of person who just wanted some stone memorial with his name on it somewhere,” Krausman said. “He really wanted to have an enduring legacy and his family knew that.”

An event to recognize the Chris Desjardins Memorial Fund is scheduled for Friday at 10 a.m. at Honey Creek Resort. Lieutenant Governor Kim Reynolds is scheduled to attend the event which will include tours of the resort.