You are here: Home / Education / U-I research examines loss of self control 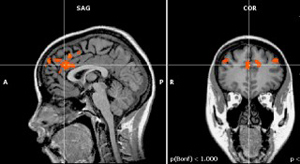 A University of Iowa researcher has confirmed that our internal reservoir of self-control can be depleted, causing things like binge eating after a period of dieting or fits of road rage.

William Hedgcock is a University of Iowa neuroscientist and neuro-marketing expert.

“The reason that people have diminished self-control after first exerting self-control is not really well understood, so we just thought the MRI might be a good way to get some information about why this happens to people,” Hedgcock says, “and it might help us try to prevent it in the future.”

Hedgcock and his team used brain scans that show how parts of the brain react when self-control is required. His study is a first-of-its kind, because it produced images of brain activity when someone is trying to exercise self-control rather than fly off the handle.

Once that well of self-control has been tapped dry, Hedgcock says there seems to be just one way to fill it up again. “For the most part, the only thing we know that can help with that is just time,” Hedgcock says. “If you take a break and you don’t have to exert self-control, it will replentish that resource.”

Hedgcock’s study was published in an issue of the Journal of Consumer Psychology. He says identifying which part of the brain is involved in exerting self-control will help figure out which medications might target certain parts of the brain and enhance self-control.