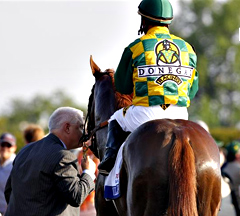 A horse owned by a group of Iowans is considered to have the best shot at denying the first Triple Crown winner since 1978.

At Saturday’s Belmont Stakes in New York, I’ll Have Another is favored to win and become only the 12th horse to sweep the Kentucky Derby, the Preakness and Belmont. But, many people are betting on Dullahan, the colt that finished third in the Derby and sat out the Preakness.

Des Moines lawyer Jerry Crawford is with Donegal Racing, which owns Dullahan. He says the potential for a Triple Crown winner drew 140 television and print photographers to a Belmont press conference on Wednesday. “They told that last year, when there wasn’t a Triple Crown on the line, there were about a dozen (photographers),” Crawford told Radio Iowa. “Whenever something’s a big deal in New York City, it’s a really big deal. I told them that they had more cameras than we have people in Iowa.”

Dullahan drew post number five for the mile and a half race. I’ll Have Another will start from post 11. Crawford said, regardless of the outcome, he and his Donegal partners will remember this week for the rest of their lives. “This has been really one of those magnificent experiences you have in life that you get to share with family and close friends,” Crawford said. “I’m just hoping that our horse can bring home the trophy and make all of Iowa proud.”