You are here: Home / Education / Public hearing focuses on “epidemic” of bullying 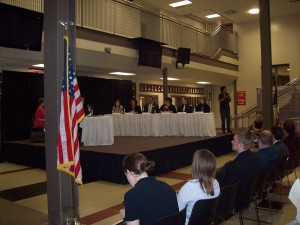 “No one should go through this — ever,” Shankles said. “Students are dying…That’s not o.k. We’re here because something needs to be done.”

Liz Sederquist is taking classes at Des Moines Area Community College rather than attend Gilbert High School where she says she was bullied after being outed as a lesbian.

“My experience at Gilbert High School has been very tough. It’s very hellish at times,” Sederquist said. “And I hope that through this testimony schools will realize that not providing a safe and supportive environment does affect students and their ability to learn.”

Emily Domayer, a 2006 graduate of Sioux City North High School, testified that she was picked on as a child because she has Asperger’s Syndrome.

“I wish that my elementary school teachers and administrators had done more to address bullying. I felt so alone,” Domayer said. “It doesn’t matter who you are, what you look like, how you dress, what faith you believe, how you learn — whatever. No one should have to feel afraid to go to school.”

Domayer described the bullying as “relentless.”

“It is so heartbreaking to me to think of young children and teens who have committed suicide because they were bullied so much, they felt the only solution was to end their lives,” Domayer said.

Paul Gausman, the superintendent of Sioux City schools, told Domayer she was “a hero” for talking about her experience and he apologized that the school didn’t do enough to prevent the harassment. Another student from Gausman’s district was featured in the movie titled “Bully” — and Gausman suggested the documentary was “quite honest” about how relentless the harassment was.

“And while we’re not particularly proud of all that is presented in that documentary, we do celebrate that our district has some of the most progressive bully prevention programs available today,” he said.

Gausman called “cyber”bullying the biggest threat teens face, and suggested bullying “is all around us” at sporting events and in shopping malls — not just at school.

Senator Harkin is chairman of senate committee that deals with federal education policy. Harkin says it’s time to “change this culture” that considers bullying a right of passage.

“And you know what? I think there are a lot of people — adults today — who are still suffering from the mental scars, the psychological scars that happened as kids because they were picked on,” Harkin told reporters just before the hearing started. “I think there’s more out there than you can imagine.”

Harkin, who watched the film “Bully” Thursday night, says he was motivated to hold the hearing after learning a northwest Iowa teenager who had revealed he was gay killed himself after repeated harassment from his peers. A new federal report suggests up to 29 percent of students are being bullied at school. Iowa and 48 other states have some kind of anti-bullying law, but federal officials say there’s no uniform definition of what bullying is.