You are here: Home / News / “Stand Up for Religious Freedom” rally 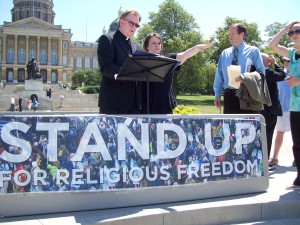 A Catholic priest was the keynote speaker at a noon-time rally outside the statehouse.

The “Stand Up for Religious Freedom” rally in Iowa was one of 145 held across the country today to protest the Obama’s administration’s requirement that religious institutions which provide health care insurance to employees cover contraception. Monsignor Frank Bognanno says religious freedom is a basic tenant of our society.

“I believe in it, you believe in it, everybody believes in it — freedom of conscience, that the government should never force somebody to act against their conscience,” Bognanno says. “especially with regard to moral issues.”

“So many times there’s this wall of separation between church and state. Well, what that means is the church should not impose their morals on the state,” Bognanno says. “However, the wall goes two ways. The state cannot force the church to accept their morals — or the morals of a group of people on some committee somewhere.”

Bognanno is pastor of Christ the King Parish in Des Moines. Governor Branstad just appointed Bognanno to the Iowa Board of Medicine after the Iowa Senate rejected Branstad’s first choice, the vice president of a group called The Power of Prayer who had been director of the Family Life Office for the Archdiocese of Dubuque.