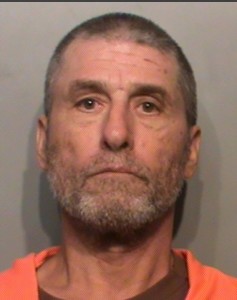 A dispute between neighbors has landed one Des Moines man in the hospital and another in jail. Des Moines Police spokesperson Sergeant Chris Scott says Daniel Parr was shot Terry Wood. Both men are 56.

It happened in broad daylight, around 6 p.m. Tuesday, as Wood was in his pickup and attempted to run over Parr, who was on a bicycle. “Wood then exited his vehicle, pulled out a shotgun and shot Parr, striking him,” Sgt. Scott said. “Our officers arrived and did find Wood immediately and he surrendered to police.”

Parr is listed in serious but stable condition at a Des Moines hospital. He is expected to survive.

Scott said Parr and Wood had apparently had two arguments over the past week. “The first dispute, from our understanding, had been resolved. The men shook hands and agreed to move forward,” Scott said. “There was a second dispute that may have possibly led to, I think, a frustrated person who decided he was going to solve this through the use of a gun.”

There were several witnesses to the shooting. Wood is charged with attempted murder, willful injury and unauthorized possession of offensive weapons.