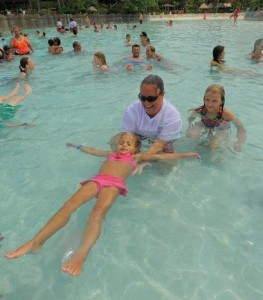 Students in at least three Iowa swimming pools will be taking part in tomorrow’s attempt to set a new record for the world’s largest swimming lesson.

Pools in Algona, Altoona and Harlan are among those in 46 states and 24 countries on five continents taking part in the record attempt. They’ll be holding simultaneous lessons at 10 AM/Central.

Debbi Cooper, an environmental specialist at the state health department, says the half-hour lesson will cover the basics. “For beginners, all the way down to blowing bubbles to how to stay safe in the water, never swim alone,” Cooper says. “They’ll be doing front floats, back floats and maybe even get into the crawl and back stroke and things like that.”

The goal, she says, is to convince parents learning to swim is important.

Cooper says, “Drowning is the leading cause of death for children between the ages of one and five and it’s shown that if a child does not participate in swimming lessons by third grade, chances are, they never will learn to swim.”

A study from the Archive of Pediatric Adolescent Medicine showed participation in formal swimming lessons was associated with an 88% reduction in the risk of drowning in children between one and four.