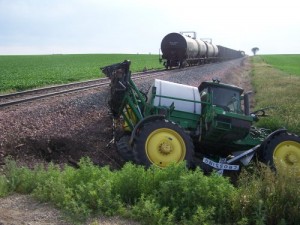 A piece of farm equipment collided with a train last night near Remsen in northwest Iowa. The farmer was critically hurt and airlifted to a Sioux City hospital.

Thirty-year-old David Keffeler of Remsen was operating a John Deere self-propelled sprayer. He approached a railroad crossing and did not see a westbound Canadian National train.

Keffeler was ejected from the sprayer. The train applied its emergency brakes prior to impact in order to slow the train.

The railroad crossing was not equipped with warning lights or a cross arm, and witnesses to the accident believe trees along the track may have obstructed Keffler’s view of the coming train.

The engineer of the train was not injured.