You are here: Home / News / One winning ticket sold in Cedar Rapids for $241 Powerball drawing 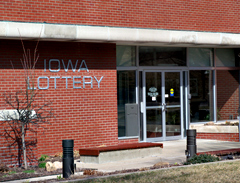 One lucky eastern Iowan may be holding the single Powerball ticket from Wednesday’s drawing which matched all six numbers.

It’s worth $241-million. Iowa Lottery spokeswoman Mary Neubauer says the state’s most valuable ticket was sold at a grocery store in Cedar Rapids.

“It was purchased at a Hy-Vee store over there,” Neubauer says. “Obviously, a Hy-Vee store is a very busy supermarket. The address of this one is 5050 Edgewood Road in Cedar Rapids.” That store will get a $10,000 bonus from the Iowa Lottery for selling the big-bucks winner.

She expects it’ll be several days before we know the identity of the winner. “Obviously, we encourage a jackpot winner to consult a financial or legal advisor before claiming a prize of this size,” Neubauer says. “This really is a life-changing amount of money. We want to make sure this person or group of persons, depending on who the winner or winners are, have all of the information they’ll need to make their decisions.”

She also stresses the importance of security and claiming ownership of the ticket. “If you haven’t already signed it, please do so immediately for safekeeping so that it can’t be claimed by someone else,” Neubauer says.

“Also, please keep that ticket in a secure location until you come forward to claim the prize.” That might be a safe deposit box at the bank or somewhere safe in your own home.

This ticket sets a new record for the most valuable jackpot winner ever sold in Iowa. “Tim and Kellie Guderian of Fort Dodge claimed a jackpot of a little more than $200-million back in October of 2006,” Neubauer says. “This jackpot ups that by another 41-million dollars.” The winning ticket is the seventh overall in Iowa to win Powerball’s big prize and it’s the 15th-largest Powerball jackpot won to date in the multi-state game.