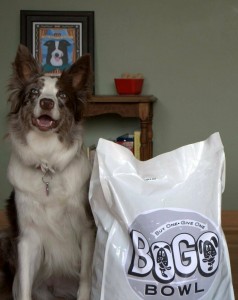 An Iowa woman has launched a company to help solve a serious problem in animal shelters across the country. Sara Henderson of Des Moines is calling her business BOGO Bowl.

“A lot of people are aware of the term BOGO, buy one get one free,” Henderson says. “But in our case, it’s buy one give one. We put that together with bowl because if you buy a bowl, you give a bowl.” The product Henderson is selling? Dog food.

For each 20-pound bag sold, BOGO Bowl will donate another 20-pound bag to the Animal Rescue League of Iowa to feed dogs in the Des Moines based shelter. Other bags are donated to the Pet Project Midwest, another initiative Henderson helped launch in 2009. The Pet Project Midwest donates pet food to low-income Iowans who have trouble affording food for both themselves and their furry companions.

“A lot of these people we found were giving their own food, and sometimes they’re going to a human food bank, sharing their meals with their pets to keep them fed,” Henderson said. There are seven formulas of BOGO Bowl dog food, with prices ranging from $41.20 to $63.40 per bag.

“We want to take over the country,” Henderson said with a laugh, “And make sure we’re helping nonprofits free up the resources they’re currently spending on food to either extend the stays of the pets in their care or do some other things they need to do in their communities.”