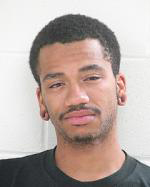 A Mason City man is jailed on several charges, including arson. Police and firefighters were called to northeast Mason City just before 3:30 A.M. Sunday on the report of a house fire.

On arrival, they were advised that the fire had been intentionally started by a man who lived at the address.

There was no one inside the house at the time of the fire, but officers later took 23-year-old Bachig Cornelius into custody in connection with the fire. Cornelius was booked into the county jail on charges of second-degree arson, domestic assault, possession of a controlled substance and possession of drug paraphernalia.