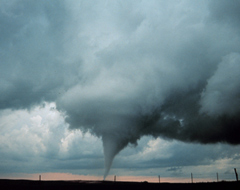 Iowans who want to keep close tabs on weather warnings may now be able to get them on their cellular phones. The nation’s emergency alert system is starting a new program this week.

Al Kenyan, a project manager with FEMA, says people need to check with their cell phone carrier to see if it’s an option to receive these potentially-life-saving alerts.

“It’s similar to a text message but it’s not a text message,” Kenyan says. “You need to have probably a newer handset or a handset that has the capability to receive these messages.” Kenyan says it’s part of a larger effort to modernize the emergency warning system. The wireless weather alerts will let you know about things like severe thunderstorms or tornado warnings.

He says Iowans should take those warnings seriously. “When your listeners get an alert, whether it’s from wireless emergency alerts or from the radio station they’re listening to or a television station, take action on it,” Kenyan says. “We’ve had cases where people have been alerted to a tornado warning and they said, ‘Well, that’s interesting,’ and they didn’t take action and they get hurt. That’s a very bad thing.”

The new program is through a partnership between FEMA, the FCC, the National Weather Service and cellphone carriers.