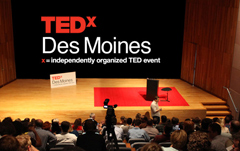 A one-day series of thought-provoking lectures is planned for central Iowa next month that will gather a diverse list of speakers including an asteroid scientist, a sociologist and a sculptor.

Billed as “idea conferences,” the phenomenon of TED Talks focus on Technology, Entertainment and Design — and an array of other topics.

Brianne Sanchez is one of the organizers of TEDxDesMoines, which has tripled in capacity since the first event was held in Iowa’s capitol city three years ago.

“They’re conferences that started out in California as little dinner parties among friends with the idea that if you gather enough interesting people together and break down the silos between industries and disciplines, you can have some really cool innovation happen,” she says.

This Des Moines event features Lee Fisher, the CEO of CEOs for Cities, who’ll talk about sustaining the next generation of American cities. There’s also one of Iowa’s best-known start-up entrepreneurs, Ben Milne, who created Dwolla, a rival to PayPal.

Sanchez says, “(Milne) is going to be talking about the future of payment networks and the space between where we are now in our society and hopefully, according to him, where we’re going to be in the future.” Other speakers include: Bong Wie, the founding director of the Asteroid Deflection Research Center at Iowa State University; Nancy Berns, an author and sociology professor at Drake University; sculptor and docent Rachel Buse; and Scott Siepker, actor, host of Iowa Public TV’s “Iowa Outdoors” and the star of the recent viral video, “Iowa Nice.”

No matter where your interests lie, Sanchez says something will capture your attention, more likely several somethings.

Sanchez says the goal is to inspire attendees to broaden their minds and find ways to creatively leap obstacles and to spark new ideas. The event is July 15th at the Science Center of Iowa in Des Moines. Learn more at: www.tedxdesmoines.com.