You are here: Home / Agriculture / Iowa favorite sweet corn arriving ahead of schedule 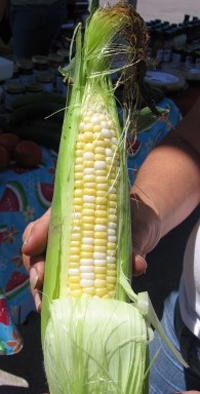 State horticulturist Mike Bevins says some corn will be ripe in a few days in the Des Moines area – the earliest he’s ever seen. Bevins says normally sweet corn is planted around the first week of April at the earliest.

“This year we had a grower who took the risk of planting…on March 17th. And he’ll have that corn available for this weekend,” Bevins said. The grower who planted on March 17th is from Indianola.

“I don’t think I’ve ever heard of anyone planting in mid-March and taking that risk,” Bevins said.

“The Friday before the 4th of July was the earliest I’ve ever seen sweet corn come in and that’s because they planted it under plastic.” Bevins also notes corn that was planted around the first week of April will be ripe in 7 or 8 days — ahead of the more typical first harvest around the 4th of July.

Warm weather has sped things up, and there’s been enough moisture in spite of overall dry conditions.