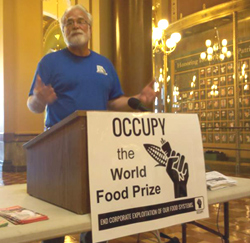 Members of the Occupy Iowa movement are turning their attention to the Iowa-based World Food Prize.

“The World Food Prize is a sham,” Cordaro said. This October, the $250,000 World Food Prize will be awarded to Daniel Hillel, a scientist from Israel who developed new ways to irrigate crops in some of the driest regions of the planet.

The Occupy group isn’t taking issue with all of the people who’ve been awarded the World Food Prize, but rather what Cordaro calls the “corporate ownership” of the prize.

Cordaro is critical of the companies for many reasons, including their use of genetically modified seeds. The World Food Prize was founded in 1986 by Cresco, Iowa native Norman Borlaug, a plant scientist known worldwide as the father of the “green revolution.”

Occupy’s Deborah Vanko admitted the initiatives of the green revolution did initially increase agricultural production around the world.

“But, in the long run, it failed in many ways and not many people are saying that,” Vanko said. “The World Food Prize continues to honor the green revolution and we’re saying that it’s not honorable.”

The World Food Prize emailed  this statement to Radio Iowa in response to the Occupy group’s concerns:
The World Food Prize was created by Iowa’s greatest hero, Nobel Peace Prize winner Dr. Norman Borlaug, to recognize and inspire breakthrough achievements in feeding hungry people and alleviating human suffering around the world. Currently, there are approximately 1 billion chronically hungry and undernourished people around the globe.  The annual World Food Prize international symposium is one of the world’s premier forums for bringing together stakeholders in the food and agriculture world, from scientists and researchers to business and government officials to farmers and grassroots advocates. They are all part of a complex food system, and, along with our Iowa Hunger Summit, our dialogue brings people together to consider and discuss new ideas, projects and solutions.