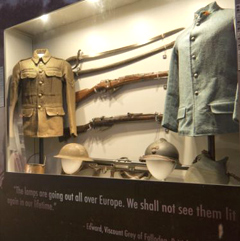 Uniforms and weapons on display in the World War I exhibit.

A traveling exhibit from the World War I Museum in Kansas City will be available for viewing in Des Moines Friday.

Spokesman Joe Godfrey says the rolling exhibit in a semi trailer is visiting 75 locations across the country.

“It has several artifacts that are from the World War I Museum in Kansas City and it’s really just talking about kind of what the war was like,” Godfrey explains.

“There’s an actual replica of trench built into it. There’s 46 artifacts weapons, equipment, uniforms and a lot of different things from that period of the war and it’s a real neat deal with this big semi tractor trailer that’s coming around to these locations.” 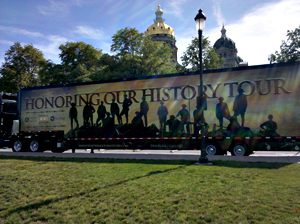 The truck carrying the exhibit will park in front of the Iowa capitol building.

He says half the donations will go to the World War I Museum and half will go to the State Historical Society. Once you are done learning about the “war to end all wars,” you can also learn about the Civil War as the historical society is currently hosting an exhibit on Iowa’s role in that war.

For more details about the World War I national tour, visit: www.honoringourhistory.com.