You are here: Home / Agriculture / Cowboy called in to help round up cattle on Omaha interstate 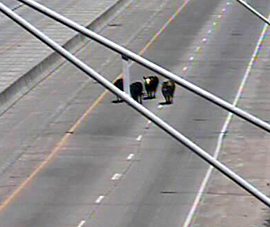 Cows on the loose.

Dog catchers had a hard time trying to corral cattle that got loose on a major freeway in Omaha on Thursday and an Iowa cowboy came to their rescue.

The J.F.K. was closed for more than five hours after a cattle truck overturned.

Of the 57 cattle in the trailer, 44 escaped and stampeded away. Logan Allen, who lives near Council Bluffs, knows how to handle a horse and how to round up cattle.

Allen says he wasn’t exactly welcomed with open arms when he showed up on his horse ready to work.

He says, “They really didn’t want us to come over and help at first because they said, ‘We can’t have civilians coming over and get hit by a car,’ and I said, ‘I’m not just some greenhorn.’ I said, ‘I don’t want you guys shooting the cattle just because you can’t catch ’em. I can catch whatever you got.’ Yeah, I like beef.” 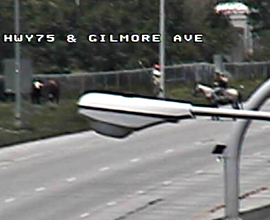 Cowboy Logan Allen works to round up cattle after an accident.

Before moving to southwest Iowa, Allen lived in Texas and New Mexico. He said rounding up cattle on the highway was all in a day’s work. He says it’s best to let someone with experience handle this kind of situation.

“Just go easy and gentle, ’cause them cows, they just had a big ole’ wreck and they don’t know what the hell’s going on. Then to ask them to get back on a trailer when they just tipped over, that’s a lot to ask for a cow,” Allen says.

“People call them dumb animals all the time but they are brilliant, really.” Allen says the semi was hauling fat cattle and they were used to seeing horses.

“They’re actually better about horses than people so if he’s going to walk up to them, they would know better a horse than a person so they stay pretty quiet,” he says.

While he has lots of experience rounding up loose cattle, Allen says this was the largest populated area that he has had a chance to “play” in.

“All’s I do is ride horses,” Allen says. “I train horses for the public and I can ride at home all day long and it’s the same for them horses everyday. You don’t get to make horses like these unless you come do stuff like this. You can’t sell a horse for a bunch of money if you just stay at the house and they don’t ever see anything. We ask quite a bit of these horses, drainage ditches all over and stuff like that and they keep clacking along.”

Allen did have to keep a close eye on the clock while helping authorities round up the cattle. He had to make it to South Dakota for a rodeo later in the day.

By Karla James. Photo courtesy of the Nebraska Department of Roads.