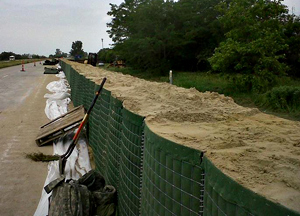 For the price of a latte, you can save a town. That’s the message being touted in Hamburg.

The southwest Iowa town is launching a major fundraiser to keep the levee built last year just outside of the city at its current height.

Hamburg-area residents are preparing to record a “Flash Mob”-type dance which they’ll post on the internet to raise awareness of their need for funding.

“We had an 11-foot levee to protect us from the west ditch and the Corps (of Engineers) and our people added eight feet to that levee, so combined, the levee is 19 feet and has held as much as 17 feet of water for 120 days,” Crane says. But now, she says, there’s a problem that puts the levee at risk.

“After the Missouri River levees are completed this September, Hamburg will be forced by federal regulations to either remove that eight feet of dirt for $1.3-million or raise $5.6-million to make (the levee) permanent,” she says. Crain says the levee project requires money the town simply doesn’t have.

“We’ve aggressively sought funding and the state of Iowa has contributed $1-million and we need $4.6-million more,” she says. “Our city and the businesses have already exhausted their funds fighting the flood.” She says they’ve tried to get grants for eight months and there’s just not a lot of money out there for secondary levees.

“There’s money out there for the Missouri levees,” she says, “and we want them to get those levees fixed, but we haven’t found any money for us.” After a series of rehearsals today and through the weekend, Hamburg’s Main Street will be closed Monday morning at 11:30 for shooting the video.

She says the dance steps and movements will be very simple but they’ll make people take notice. “The words are very clever and it will be very charming,” she says.

“We’re going to have people of all ages doing this and the volunteers involved in this are really good at what they do. It’s gonna put a smile on your face and you’re going to walk away and say, ‘They’re a small town but they sure are resourceful and they have a lot of talent.'”

Crain says the video will be posted to Youtube, Google+, Facebook and another video site. They’re also requesting that everyone forward it on whenever they can. A Paypal link to donate will be listed with the video or a check can be made to the City of Hamburg Iowa Flood Recovery.

“Our business strategy is to use email addresses from businesses, citizens and friends and get the message out,” the mayor says. “We need 1.5-million people to donate $3.00 each.”