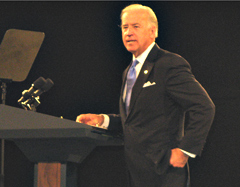 Democrat Vice President Joe Biden is back in the state today on a campaign stop. Biden kicked off a two day swing through eastern Iowa in Waterloo, where he spoke to members of the United Auto Workers.

Biden attacked likely Republican nominee Mitt Romney as the “outsourcer-in-chief.” “So you’ve got to give Mitt Romney credit, he’s a job creator — in Singapore, China, India, he’s been very good at creating jobs overseas,” Biden said as the crowd reacted with clapping and cheers.

Biden had more harsh criticism for the former Governor of Massachusetts, who he says called the Mr. Obama out of touch for encouraging young people to try and get manufacturing jobs.

“Out of touch? A prospect of president with a Swiss bank account and a retirement account in the Cayman Islands? All kidding aside, did you ever think you’d be choosing between two people for president, one of whom had a Swiss bank account?,” Biden asked the partisan crowd. Biden says the Obama administration sees good wage jobs as a key to re-building the economy.

Romney spokeswoman Anne Henneberg responded that Biden is only trying to sell voters on the disappointing results of the president’s disappointing economic policies.

This is Biden’s third trip to Iowa this year. He will give a similar speech in Dubuque and Clinton tomorrow.