You are here: Home / News / Iowa Lottery will introduce a special give away, after a spell check

The Iowa Lottery will unveil a specIal drawing Sunday after a little behind the scenes tweaking to ensure the tickets don’t include any offensive language.    Audio: Dar Danielson report :60 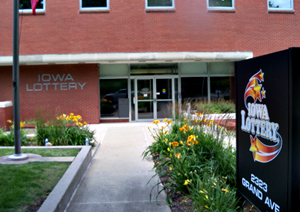 The promotion will give away two-million dollars in unclaimed Hot Lotto and Powerball prizes — including one-million dollars given away in a live drawing at the Iowa State Fair in August.

“If you buy a Powerball ticket, which was some unclaimed monies that we had, and Hot Lotto ticket, which was obviously the one that was given back, you’ll receive a trailing ticket which will allow you enter for those prizes. The special third ticket requires a string of numbers and letters on it for security and identification.

Rich says they were testing the new ticket and found the letter combinations could “spell words that I can’t say on the radio.” They went back to the drawing board to come up with a fix.

“We started thinking, okay we know the words the we don’t want it to spell out, so do we make it so that you can only do three letters in a row and then it has to be a number?…but when you mess with programming with a gaming system you might mess up something else. So the conclusion was the easiest thing to do would be to remove the vowels,” Rich says.

“We couldn’t think of many words you wouldn’t want to say on the radio that didn’t include a vowel.” The Iowa Lottery will select 49 of the special tickets and 34 will win $10,000, while 15 others will go in a pool for the “Mystery Millionaire” drawing at the Iowa State Fair.

The Lottery will draw out tickets, with each person winning $25,000 and the last ticket winning the one-million dollar prize. The prize money came from Iowa’s share of a Hot Lotto prize that was first claimed, and then given up after the lawyer who turned it in couldn’t tell the lottery the name of the person who purchased the ticket.

The other money came from an unclaimed winning Powerball ticket in Georgia.