You are here: Home / News / Lottery in waiting mode on release of names of jackpot winners 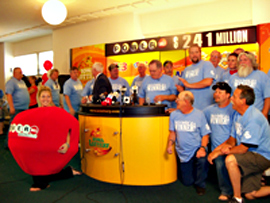 The Iowa Lottery is still waiting to learn if it can release the names of the 20 Cedar Rapids Quaker Oats workers who claimed the state record $241-million Powerball jackpot.

The group showed up one week ago to collect their money, but said they would seek legal action to keep their full names private.

Iowa Lottery spokesperson, Mary Neubauer, told the Lottery Board Thursday the group was given 10 days to file an injunction and the Lottery won’t take any action until the clock runs out.

“That time frame expires on July sixth, which is next Friday. We have not received any notification that the group has done anything to date, it doesn’t mean that something couldn’t occur between now and then,” Neubauer says.

“At this point we’re kind of in this waiting period to find out what occurs with the court process.” Neubauer says they will not discuss the issue of releasing the names until they get a court ruling, or the group fails to take action.

“I think it is a good idea for the Lottery and for the board to allow any court proceeding to run its course so the we’re showing due deference to the courts. And then we can come back afterwards and say ‘did the law work in this case’,” Neubauer says.

Members of the winning group known as the “Shipping 20” for the department where they worked, said they wanted to keep their full names private to prevent people they didn’t know from soliciting them for money. Each member of the group took home $5.6-million after taxes.