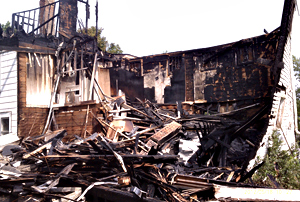 The fire that destroyed this Atlantic building has been ruled an arson.

A reward is being offered for information leading to an arrest in connection with a fire May 18th, that destroyed a home in Atlantic.

The fire erupted at the structure owned by Hockenberry Family Care Funeral Home, at around three a.m. on that date.

“The investigation into this has been going on since the day of the fire, we have done our own testing and the insurance company had their agent out and did some testing as well. We dug through the debris, it’s a definite burn pattern in there, we know what was used. But it definitely is a case of arson,” McNees says.

McNees says they’ve completed interviews with all the know witnesses and are reaching out for anything that may’ve been missed and they are asking anyone in the public who may’ve seen something to give them a call and help out with the investigation.

A reward of up to $10,000 through the Arson Hotline is being offered for information that leads to the arrest and conviction of the person or persons responsible. Anyone with information about the fire should call the Atlantic Police Department at 712-243-3512. You can remain anonymous.

Firefighters in Atlantic were on the scene for nearly six-hours. Witnesses said the flames started on the upper floor on the east side of the home, in an area that served as an apartment, above the garage. McNees said young people had often used the vacant house as a “hang out.”

No one was injured fighting the fire.