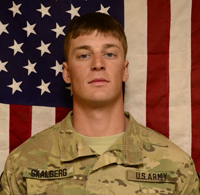 The Defense Department confirmed this weekend the death of an Iowa soldier in Afghanistan. Twenty-five-year-old Sergeant James Skalberg, a native of Emerson, died while serving with the U.S. Army.

His vehicle was hit by an improvised explosive device on June 27th. Another soldier, First Lieutenant Stephen Prasnicki of Lexington, Virginia also died in the blast.

Skalberg graduated from Nishna Valley High School in 2005 and later attended Peru State College in Peru, Nebraska before enlisting in the Army. Skalberg had previously been deployed to Iraq.

Skalberg is survived by his wife Jessica and son Carter, who live in Red Oak; his parents James Senior and Kelli Skalberg , and sister Spring Skalberg. Skalberg’s family released the following statement:
“James was loved by his family, friends and community. Carefree, easy-going, reliable, level-headed, loving, he was a gentleman in all respects. He was the true love of Jessica’s life. They met when Jessica was 15-years old and Jamie was 17 and their young love grew into so much more. A proud father, he was excited to have more children and was looking forward to teaching them how to play basketball. He was proud to serve his country and was greatly respected and loved by his Soldiers. He will be greatly missed and remembered forever.”