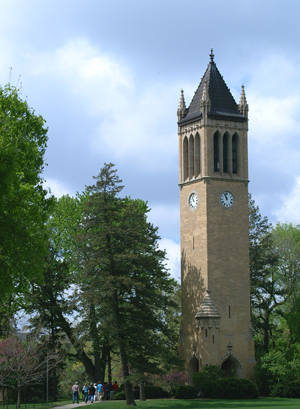 Today is the 150th anniversary of the Morrill Act that President Abraham Lincoln signed into law on July 2, 1862.

Iowa was the first state in the country to take advantage of the legislation.

The Iowa State Agricultural College and Model Farm, now Iowa State University,  was the nation’s first so-called “land-grant” university. A mid-day concert was held on the I.S.U. campus in Ames to mark the occasion.

The campanile bells tolled 150 times at noon to mark the sesquicentennial.

The Morrill Act gave each state that was still in the union in 1862 30,000 acres of land for each senator and member of congress that state had.

The land was then sold and the proceeds were used to finance the start of colleges. That’s how the phrase “land-grant” is associated with universities like Iowa State that got their start with the Morrill Act.

A charter for the Agricultural College and Model Farm in Ames was established by state officials in 1858 and it was given land-grant status in 1864. The school didn’t open for classes until the fall of 1868 and its first graduating class in 1872 had 26 students. Today, nearly 30,000 students are enrolled at ISU.