You are here: Home / Military / Soldier who lost four limbs in Afghanistan at White House today 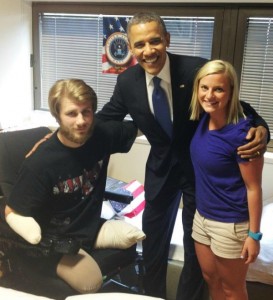 An Iowa sailor is one of about 1200 service members invited to spend Independence Day at the White House.

Taylor Morris of Cedar Falls lost all four of his limbs after stepping on an improvised explosive device in Afghanistan in May. He was just discharged from Walter Reed Army Medical Hospital. Morris says the White House visit will make for a special 4th of July.

“There’s a dinner. I think Brad Paisley is going to be playing and a fireworks show we’ll be watching out on the lawn, hopefully the weather stays good. I definitely will be putting my nicest shirt on,” Morris says. “A Brad Paisley concert — you can’t beat that.”

Morris is just the fifth person to survive a quadruple amputation at Walter Reed. The explosion happened two months ago and he talked about the incident with KCNZ, his hometown radio station.

“I was conscious through the whole thing,” Morris said, “and so when I stepped on it I could hear it and feel the blast, feel the heat and I remember looking at my arm when I was trying to stabilize myself in the air as I was back flipping through the air and noticing that my arm was gone and then I hit the ground and noticed by legs were gone, too.”

Morris had a face-to-face meeting with the president last week when Obama toured the “Wounded Warrior Wing” at Walter Reed.

“He’s a good guy. We had some good conversation. (He) was actually fun to talk to,” Morris said. “Sometimes you get those visitors who are kind of quiet and awkward and nobody really knows what to say, but it just kind of seemed to flow when he was in the room.”

Morris has been fitted for prosthetic arms and legs, but has a very long road to recovery ahead of him.

“It’s probably going to be like a year, a year and a half. I’ve just got to work with the prosthetics to become proficient with them,” Morris said. “I haven’t even gotten up on the legs yet. I’ve stood up on each one individually, but not both of them yet. I’m going to learn how to balance again and learn to walk again. There are even stages there. I’m going to have to walk, first, on the ‘shorties’ I’ve got, then they’ll make them a little longer and then a little longer and then they’ll add knees into the picture.”

“I can eat and open the ‘frig and go to the bathroom. I’m not quite able to shower by myself yet and not quite able to fully dress myself yet. I can get about 90 percent, then I need help with that last little bit,” Morris said. “I would like to get just quicker at doing them and that will be an on-going process…I would say once stuff starts to become second nature, I’ll be pretty much in good hands.”

Morris’ family and friends are keeping an online journal of his recovery. They’re also accepting donations to the foundation that has been set up in his name.  Find the link on the left side of the journal’s homepage.