You are here: Home / Fires/Accidents/Disasters / If you’re outside & hear thunder, you’re at risk from lightning bolts 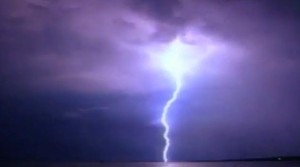 The extreme heat isn’t the only serious weather hazard for Iowans this summer. Fast-moving storms can raise the risk of being hit by lightning.

Meteorologist Jeff Johnson, at the National Weather Service, says there are words to live by when it comes to lightning: “When thunder roars, go indoors.”

Johnson says, “Unlike other severe weather hazards which you probably won’t be impacted by, there’s a pretty good chance every summer you’re going to have to deal with lightning safety at some point if you’re outside.”

Bolts of lightning kill an average of 54 people nationwide every year. If you’re outdoors and you hear thunder, he says you’re at risk.

“There is no safe place outside from lightning hazards,” Johnson says. “The remedy to it is to go inside a building and to qualify, the building has to have either electrical or plumbing and that’s to ground the lightning should it hit the structure.”

He says taking refuge in a large motor vehicle, like a school bus, may protect you.

“A hardtop car, not a convertible, offers protection as well,” he says. “It’s not the best place for severe weather but it certainly is for lightning hazards.”