You are here: Home / News / State sets out traps to monitor for walnut twig beetle 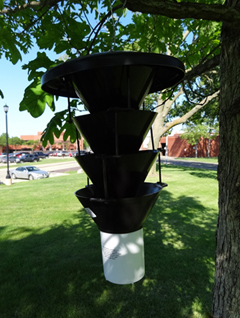 State conservation officials are on the lookout for a tiny bug that could do damage to the state’s black walnut trees.

“It’s a very, very small beetle, it’s less than two millimeters long or about one-sixteenth of an inch long. They kind of congregate together so they attack walnut trees all at once. They carry a fungus with them called geosmithia that causes a tiny canker on the branches,” Feeley says.

A canker is a sunken region under the bark of the tree where the material has been killed off by the fungus. One canker isn’t a problem, but the infestation eventually leads to what’s called the “thousand cankers” disease.

Feeley says, “There are just thousands of small cankers that show up to the point where there are just no resources that can flow through that tree.”

Trees die off within three to five years. The beetle and cankers have hit trees in Arizona, California, Colorado, Idaho, New Mexico, Oregon, Utah, and Washington in the 1990s. And was recently confirmed in Pennsylvania, Tennessee and Virginia. Feeley says they’re putting out traps to be ready if the bug moves into Iowa.

He says it’s strictly precautionary and they use a trap with a pheromone that attracts the walnut twig beetle. “We’ve scoured the state so far and found nothing. And we keep moving our traps to different location each month, so the great news is so far we’ve found nothing but native ambrosia beetles,” Feeley says.

Feeley says if you notice a trap, you should leave it alone so it will work. He says there’s nothing you can do to prevent the beetles from getting on your trees. He says there’s no fungicide or insecticide or other cure, the best thing to do is make sure the walnuts are planted in good soil so they can be healthy.

Not all of the walnut twig beetles carry the fungus. Feeley says Iowa has the largest stand of walnut trees in the U.S. He says there’s not a big walnut harvesting industry in the state as most of Iowa’s trees are used for lumber.