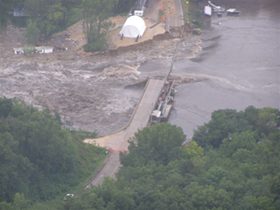 A key state official says a re-created eastern Iowa lake must be accessible to the public, not just the landowners around the lake.

The dam that created Lake Delhi collapsed during massive flooding two years ago, draining the lake which had only been accessible to those who owned property around the lake.

Iowa Department of Natural Resources director Chuck Gipp says since the state’s putting up about 20% of the cost of rebuilding, the lake will no longer be private.

“My position as director is to make sure, as our mission is to help enhance natural resources, that any restoration of Lake Delhi and the dam would have to ensure we had public access to that lake,” Gipp says.

This past spring state legislators committed $5-million in state gambling taxes to rebuilding the Lake Delhi Dam. “One of the conditions of the appropriation of the $5 million that would come from the Rebuild Iowa Infrastructure Fund or, once again, gambling profits, is that they have to provide a plan to the legislature by December 31st of this year in how they are going to improve public access, how they are going to improve waste water issues of the homes around there,” Gipp says, “so it doesn’t become an environmental issue with the lake itself.”

There also must be a “fish passage,” according to Gipp, so fish in the Maquoketa River can swim around the new dam. Gipp made his comments today during taping of the “Iowa Press” program which airs tonight on Iowa Public Television.

The pricetag for rebuilding Lake Delhi is $17.5 million. The Federal Emergency Management Agency just reversed a previous decision and has said the project is eligible for federal support, although the depth of that commitment will be determined after site visits.

The original Lake Delhi covered 450 acres and was about 9 miles long.