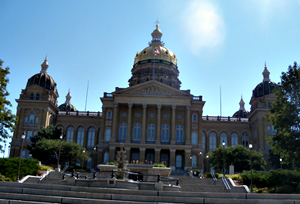 A state senator says Democrats in the Iowa legislatre will try to find a way around Republican Governor Terry Branstad’s resistance to having the State of Iowa provide government-funded Medicaid coverage to more uninsured Iowa adults.

Senator Jack Hatch, a Democrat from Des Moines, argues state government and Iowans who’re covered by private insurance would save money if the state covers those who currently are uninsured and get “charity care” from clinics and hospitals.

“The fact that the governor has stated that he does not want to expand Medicaid has put a lot of stakeholders in an awkward position,” Hatch said during an early morning news conference at the statehouse. “…I think hospitals and other stakeholders are going to begin to be a little bit more public in this discussion.”

But Governor Branstad for months has been saying he does not trust the federal government to follow through on the promises in the Affordable Care Act and provide federal money to the states to cover the uninsured.

“I think this is clearly unaffordable and unsustainable,” Branstad said this morning during his weekly news conference.

Senator Hatch says he intends to schedule a public summit in which he and other Democratic legislators will take a “second row” and listen to doctors and hospitals talk about expanding Medicaid to cover more uninsured Iowans. The governor says he wants to take an “Iowa approach” to getting more uninsured covered, and his approach would require the estimated 150,000 uninsured Iowa adults to pay some or all of the premium cost.

“We think that there’s a lot that we can do together,” Branstad said today. “But I just think we would foolhardy to do what we did before with No Child Left Behind and buy into a federal program that we know is unsustainable and unaffordable and won’t work. We need to, instead, put together one that will work for our state.”

Senator Hatch said he wants to come up with a “bipartisan” solution, but Hatch also vows that Democrats in the legislature will push to grant Medicaid coverage to uninsured Iowans, through the federal Affordable Care Act’s provisions.

“Iowa will not roll over and just not attempt to try to expand Medicaid,” Hatch said. “We have an obligation to those thousands of Iowans, their families and employers as well.”

Branstad cites estimates indicating 150,000 Iowa adults would have to be placed in the Medicaid program under the federal health care reform act provisions that take effect in 2014. Hatch cites a different estimate indicating about 80,000 Iowa adults who are currently uninsured would be covered.