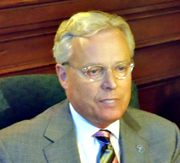 Vaudt, a Republican, released a chart of state spending that compares the new fiscal year budget with the past two state budgets.

“Back in fiscal year of ’11 we were spending a dollar fourteen for every dollar coming in the door of ongoing revenue. You can see in the fiscal year ’13 annual budget we’re down to a dollar three,” Vaudt says.

“Our revenues that were projected for each of these budgets have really rebounded significantly. When I talk to state auditors from across the country, most states are seeing improved revenues, but they’re not seeing as much of an improvement as the state of Iowa is seeing, and that’s really made it easier to address that spending gap,” according to Vaudt. “And that’s why it’s so important to control that spending side as revenues have rebounded, because it brings us back into balance much quicker that way.”

Vaudt says a strong farm economy has been one of the big reasons for the continued revenue improvement. There are some areas of concern, including an 80% deficit in the amount of money needed to fund the state employee retirement system.

“You can see back at the end of 2000 our shortfall was projected to be about $327-million, at the end of 2011 that has grown to 5.7-billion-dollars. This is one place where we can’t loose sight of this particular liability, because it is a liability that we have generated, and it’s some that we are going to have to take care of over the next several years,” Vaudt says.

He says the pension shortfall is one area where he would support spending one time money or special revenues to pay down the deficit. Vaudt says the stability of the federal government is another concern as half of the 12-BILLION dollars spent by the state comes from federal sources.

Vaudt says, “State officials because of the uncertainty at the federal level, we have to be very, very cautious. My true belief is as the federal government starts to get its act together fiscally, it’s going to put more pressure on the states, because that six-billion dollars we’re getting from the federal government will more than likely shrink.” Vaudt says things are looking good, but the work isn’t over.

“I am very proud of what Iowa has done over the last few years to actually make the improvements it needs to make, but as I mention before… in Iowa for every dollar spent fro general fund services there’s a dollar of federal money that supports those service,” Vaudt says. “In order for use to truly be successful we’re gonna need the federal government to get its act together and join us in doing the type of fiscal practices that I see the State of Iowa doing over the last two years.”

Governor Terry Branstad held his weekly meeting with reporters before Vaudt released his reports. The governor said he hadn’t seen an advanced copy, but echoed Vaudt’s comments that they’ve made progress and have more work to do. “We’re very appreciative of the auditor…He’s a CPA, he tells it like it is. He’s been critical of both parties, but I think he has given us honest and good advice and counsel on what needs to be done to make sure that we have a state budget that is sustainable, and we’re committed to continue to working with him,” Branstad said.