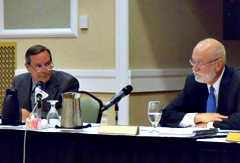 The Iowa Racing and Gaming Commission today refused a request for a long-term agreement for the current operator of the Sioux City Argosy riverboat casino, and set a timeline for accepting proposals for a new land-based casino.

Current casino operator Penn National Gaming and the non-profit Missouri River Historical Development (MHRD), which holds the license for the casino, have been at odds over the contract.

Penn National Vice president Carl Sottosanti told the Racing and Gaming Commission they wanted a contract that runs through 2015 to provide some stability to them and the employees.

“We’ve got folks who have worked at that facility for 20 years. We have a very few select folks who have moved into Sioux City, relocated their families in the course of the last six to nine months, who are looking for a little certainty or at least an understanding of what the future might hold for them,” Sottosanti says.

“We just feel as we’ve said in our negotiations with MHRD that a reasonable time frame to allow this process to unfold is a service to all of our employees and our constituents.” Commission chair, Jeff Lamberti, told Sottosanti casinos face a one-year contract each year as their licenses are renewed each year. After some back and forth, Penn officials said they would not accept a one-year contract, but the commission unanimously approved it.

After the meeting Lamberti said the commission’s action will not be to blame for closing the casino. “Well if the facility closes, that’s the sole decision of Penn at this point. We’ve agreed to extend their operating agreement…to March 31 of 2013, and we’ve also said we’ll extend it all the way out to the opening of a new land-based facility,” Lamberti said. “But trying to force the commission to accept a date of March 31st, 2015 is a little arbitrary.”

Penn National has filed a lawsuit in Polk County seeking to block the commission from opening up the process for a new land-based casino in Sioux City. Lamberti was asked by reporters about that suit.

“Obviously we don’t agree with it and through our legal counsel we’ll contest it, we believe we had the authority to do what we did,” Lamberti said. The commission is now taking applications for those who’re interested in building the land-based casino.

Lamberti believes they will have plenty of people who want to make a proposal. “I can’t say specifically because we’re so early, but the indications are there’s going to be a lot of interest in a land-based facility in Woodbury County,” according to Lamberti. He calls the chance to build the new casino a big opportunity.

“Because you have kind of a unique situation where you have a market going open on the market and our goal is to get the best facility for the people of Iowa, which also benefits obviously the people of Woodbury County,” Lamberti said. “But you’ve got this situation where you’ve got this pretty good sized market opened up to everybody. Yes, we expect strong interest in that facility.”

MHRD chairman, Mark Monson said after the meeting they were just hoping to get an agreement approved. “We were at the mercy of the commission and we were ready to do whatever they asked us to do,” Monson said. He was asked what today’s vote would mean to them.

“I’m not totally sure, but we will figure that out,” Monson said. He said the group will have to meet to see what they do next.

The Racing and Gaming Commission is now taking applications for the land-based casino in Sioux City and said those applications will be due by November 1st. They will then begin the selection process and hope to make a final decision by April 18th of next year.