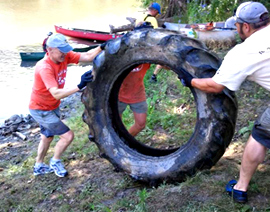 Hundreds of volunteers plucked tons of garbage from the Iowa River last week.

The effort was part of the Iowa Department of Natural Resources’ Project AWARE, which stands for A Watershed Awareness River Expedition.

Project director Brian Soenen  says much of the material pulled from the river between Dows and Marshalltown can be recycled.

“We’ve got over 14 tons of scrap metal, four-and-a-half tons of just trash and about a-half ton of appliances,” Soenen said.

This was the 10th year for Project AWARE and it was a record breaker in at least one respect. “In one day alone, volunteers plucked 259 tires out of the river,” Soenen said.

That’s the most tires pulled from a river in a single day over the project’s 10-year history. Over the full seven days, more than 1,300 tires were removed from the 90-mile stretch of the Iowa River. Soenen said there are services available for Iowans to properly dispose of tires.

“Often what comes with that is a disposal fee and unfortunately there are people who aren’t willing to do the right thing and pay the fee,” Soenen said. “Instead, they drive out to a rural area, toss the tire over a bridge, wipe their hands and drive on.” Volunteers faced a difficult challenge this year as Soenen said the Iowa River, like many waterways across the state, is extremely shallow from a lack of rain.

“On one hand, low water can be a blessing because you see more stuff. If it’s low because it’s dry, like it has been, the water’s clearer – there’s not as much sediment in it and you can see bottom,” Soenen said. “It also hinders the clean up effort if it’s too low because as you start picking up all that stuff you see, your boat gets loaded up faster, requires more water to float and pretty soon your boat is loaded and you can’t float a boat anymore.”

Between 130 and 180 volunteers turned out daily last week to help with the river clean up, according to Soenen.