You are here: Home / Crime / Courts / Evansdale lake being drained in search for missing girls 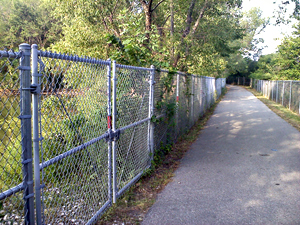 Bike path where missing girls’ bikes were found in Evansdale.

Officials are draining a northeast Iowa lake as part of the search for two girls who went missing Friday afternoon.

Divers began searching the lake Friday and crews completed a dragging operation of the lake Sunday, but found no trace of the girls. Rick Abben, the chief deputy in the Black Hawk County Sheriff’s office, talked with reporters late Monday afternoon.

“It is our opinion that we should be 100 percent sure and, in order to be 100 percent sure, we are going to have to drain that lake to do that,” he said. “…If we do find out that, you know, they are not in there, then we can put our efforts totally somewhere else.”

Ten-year-old Lyric Cook-Morrissey of Waterloo and eight-year-old Elizabeth Collins of Evansdale were at their grandmother’s house in Evansdale when they left on their bikes and were last seen in downtown Evansdale early Friday afternoon.

A volunteer fire fighter found the bikes on a nature trail, near Meyers Lake, at about four o’clock Friday afternoon. Officials began draining the lake this afternoon. “They told me it was, like, almost a five acre lake, so it’s going to take some time,” Abben said.

“But one thing that we have going for us is because it’s been so hot and dry and the Cedar River is so low — and that’s where the lake drains into…things are moving right along.” Investigators will stay on the scene throughout the night to monitor the lake draining process.

“Just in case something would come up for us, so we can get people to respond out there as soon as possible,” Abben said. At about 12:30 this (Monday) afternoon cops and other law enforcement officials began stopping vehicles at several intersections in Evansdale, passing out fliers and asking people whether they had seen the girls.

“We’re stopping every vehicle that came through, just again trying to get information of anyone that may have been (in downtown Evansdale) at that time of day on Friday,” Abben said, “or if they weren’t here anytime the time of day, if there were out here anytime that day and may have seen these two girls in the city of Evansdale.”

A purse one of the girls had been carrying was found near the bikes. An electronic device the younger girl carried was found in that spot, too. “It was inoperable for cell phones,” Abben said, “But I’m being told by the family that she could play games on the thing and then listen to iTunes or something that kids do now-a-days.”

Authorities have checked surveillance video from banks and other locations that might show the girls in the Evansdale area. “All avenues are being looked into,” Abben said.