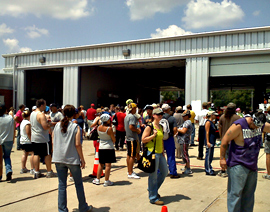 Volunteers arrive for the weekend search for two missing girls in Evansdale.

The girls, who are cousins, were last seen riding their bikes in downtown Evansdale, which is just east of Waterloo and their bicycles were found a few hours later, on a natural trail that’s near a lake.

Black Hawk County Sheriff’s Department chief deputy Rick Abben says Meyers Lake has been searched by divers and others in boats with equipment that swept the bottom of the lake.

“With the lake being checked and nothing found law enforcement is not ruling out anything,” Abben says, “but there is nothing to indicate foul play at this time, so all options are under consideration.”

A news conference is scheduled in Evansdale at 11 a.m. and officials expect to release more details about a reward that’s been established for anyone who provides information about the girls’ whereabouts. Ten-year-old Lyric Cook-Morrissey of Waterloo and her cousin, eight-year-old Elizabeth Collins of Evansdale, were last seen at about 12:15 Friday afternoon.