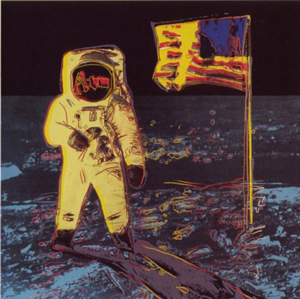 An exhibit marking five decades of American space exploration is now open at a Davenport museum.

As part of NASA’s 50th anniversary, the Figgee Art Museum is showing a 72-piece collection of paintings, drawings and sculptures about space.

Figge curator Rima Girnium says another dozen objects are from the University of Iowa’s physics and astronomy department, as U-of-I scientists built instruments flown on more than 60 space missions.

“That exhibition begins with the ‘Rockoons’ which are the rocket-launched balloons that were responsible for discovering the Van Allen radiation belts,” Gurnius says, “as well as some models of some of the spacecraft and instruments.”

The radiation belts around Earth are named after the late James Van Allen, the U-of-I scientist who discovered them.

In addition to the actual artifacts, the exhibit includes photographs from Annie Leibovitz, an oil painting by Norman Rockwell, and many others. “The Andy Warhol is one of the last images that was created before his death and it represents the moonwalk,” she says.

“It’s silkscreen on paper, 1987. He took sort of a very iconic image of Buzz Aldrin on the lunar surface.” This unique exhibit will run about three months in Davenport, through October 7th. Gurnius says exhibiting actual space flight instruments alongside the artwork they inspired reinforces the connection between science and art.

“We’re trying to find a way of reaching out to people who would not necessarily be interested in art because space is something that a lot of people relate to and are fascinated with,” Gurnius says. “Our hope is that we can bring in a whole variety of people and really show them how art is relevant to their everyday lives and offer an interesting perspective of important historical events.”

The exhibit also features a musical production based on sounds from space gathered by a U-of-I researcher. Learn more at: www.figgeartmuseum.org.