You are here: Home / Fires/Accidents/Disasters / Hamburg is “Dancing for Donations” (video) 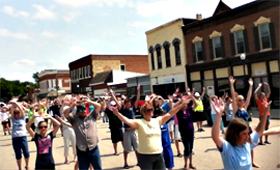 Residents of Hamburg dance in a video in an effort to raise donations for their levee.

Residents in a southwest Iowa town are hoping a video they’ve posted online will help them raise enough money to build a new Missouri River levee.

Hamburg was saved from flooding last year when workers rushed to add eight feet of dirt to the top of the levee, but federal officials now say that extra dirt must be removed — or the town must build a brand new levee.

The State of Iowa has pledged a million dollars for the effort, but Hamburg has to raise the rest.

This is how the narrator of the video puts it: “We need $4.6 million more. For the price of a latte, you and 1.5 million other donors can help save a town.”

Many of the town’s 1200 residents participated in a “flash mob” in late June and the “Dancing for Donations” video features a familiar song, with new lyrics:  “Hauled a lot of dirt and tamped it. Worked to fill sand bags all day long, all so we can have a future in the city. We’re itchin’ to appear in this ridiculous song. Big Mo keeps on churning. Flood threats continue, we’re learning. Levee! Levee! Save us from the River!”

In case you didn’t recognize the song, it’s “Proud Mary” — first performed by Tina Turner and often referred to by another title: “Rollin’ on the River.”