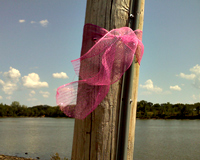 The parents of two girls who went missing in northeast Iowa say they believe the girls were abducted.

Ten-year-old Lyric Cook and eight-year-old Elizabeth Collins were last seen on Friday riding their bikes in Evansdale.  The bikes were discovered near a lake, which authorities are now draining as part of the search.

Local residents, such as Matt Robbins, are worried about what will be revealed as the waters recede. “I really don’t know, but I pray that they’re not in (the lake),” Robbins said. “I’d rather, you know, see them still alive somewhere.”

Members of the Cook family have said they doubt anything will be found in the lake as their daughter was a good swimmer and the girls would’ve removed their shoes.