You are here: Home / Crime / Courts / Tips coming in, but still no sign of missing Evansdale girls 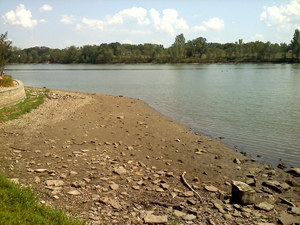 Officials say tips are now pouring in from across the country because of national attention to the search for two missing northeast Iowa girls.

Rick Abben, chief deputy in the Black Hawk County Sheriff’s office, this afternoon told reporters the calls are coming in from “all over.”

“Every tip that comes in is something that needs to be checked,” Abben said, “and we’re doing that.”

The two girls were last seen riding their kids in downtown Evansdale early Friday afternoon. Some of the tipsters claim to have seen the girls outside of Evansdale — even in other states.

“We have people that think they may have seen someone and those tips are being followed up on,” Abben said during a 4 p.m. news conference.

Abben would not estimate how many tips investigators have checked out, and ruled out. He dismissed the idea national attention to the case and tips from around the country are an unnecessary diversion for law enforcement.

“Law enforcement…we think we’re all professional here or try to do the best we can and so things are proceeding,” Abben said. “But I don’t think it’s hurt anything, by any means.”

The girls’ bicycles were found on a nature trail, near Meyers Lake and officials began draining the lake early Monday afternoon to completely rule out the possibility the girls drowned. A reporter asked Abben this afternoon if investigators from the FBI and other agencies might leave the Evansdale area if no more clues are found.

“Right now we’ll have ’em here as long as we need,” Abben said. “We’re still working this as a 24/7 operation. Nothing has been said that, ‘Hey, if the lake is dry that we’re going home’ because we’re not going to do that. We’ll just have to see what happens once the lake is drained.”

Abben has been the chief spokesman for the search effort, which began Friday afternoon. Abben told a reporter today that the investigation was in the “same place” as it had been at the start and there was “nothing more” to say.

“”We continue to get leads in continuously and they’re being to be followed up on, but we have,” Abben said, pausing before adding: “We still haven’t found these two young ladies.”

As for whether the girls’ relatives may be suspects, Abben gave this response: “Everyone is, you know, a suspect until we find something. (The families) have been talked to. They’ve been very cooperative with us and we have no reason to believe that there’s any foul play or anything at this time, so we just continue to investigate.”

Search dogs have been seen around the lake, but Abben told reporters he is not able to discuss what the dogs did or may have found.